From Tailored Furniture to Module-R

From Tailored Furniture to Module-R

Custom Consoles celebrates its 18th anniversary this year. The company was originally incorporated in 1996 as a specialist manufacturer to the broadcast industry, designing and building individually tailored technical furniture.

The past two decades have seen a major swing from dedicated hardware towards virtual devices running on personal computers. The objective was obviously to reduce capital costs wherever possible. Production studios, master control rooms, post-production facilities and playout suites are today dominated by keyboards, video displays and mice.

As a designer and manufacturer of studio furniture, one of our first responses to these changes was to automate the development and production processes at our 12,000 square foot headquarters in Leighton Buzzard, Hertfordshire. From 1999 onwards, we have been using 3D computer aided design and visualisation software. The CAD data feeds computer-controlled tools which allow materials to be machined in three dimensions. This investment eliminated the need to create every furniture element by hand, increasing production accuracy and speed.

Custom Consoles built its name in the design and manufacture of bespoke furniture to a client base that includes the BBC, Channel 4, Carlton, TV4 Sweden, and Sony. Due to ever increasing pressure on timescales and costs, we introduced in 2006 a pick-and-mix technical furniture system called Module-R. This product range allows robust and aesthetically attractive to be configured for practically any required room dimensions from a selection of high-quality pods, base sections, 19 inch rack housings, worktops, end-panel modules and legs. Coordinated desk pods are available as single-bay sections with up 10U chassis capacity. Module-R cabinet construction is in high-quality veneered MDF. Other features include continuous brush-strip cable access to front worktops. Recent additions to the range include new 19 inch rear-desk equipment pods, new front-access panels with increased ventilation, and optional hardwood worktop edging.

In 2007, we applied the same thinking to the task of mounting flat-screen display panels in process control areas. Widely used by broadcasters, in security centres and industrial process control suites, Media Wall is a robust and efficient multiscreen mounting system. The latest version features a series of enhancements including narrower front-to-back depth, reduced from 600 to 500 millimetres. Like its predecessor, the new version of Media Wall is fully self-supporting and retains the option of adding coupling brackets directly to the studio wall.

Available in a silver-anodised or black-powder coated finish and in bespoke widths, Media Wall incorporates height-adjustable horizontal beams suspended between 2.3 metre high aluminium columns. Equipment pods with 19 inch racking behind removable vented panels can be incorporated at floor-level. Freely adjustable horizontal and vertical screen spacing replaces the former discrete-mount mounting holes. This allows individual display screens to be positioned so that their edges meet exactly to form a continuous horizontal monitorscape limited only by the boundary of the display itself. Cable management within Media Wall is now along ducts with finger-trunking slots. This combination ensures that all wiring is fully concealed and can enter or leave the structure at any desired point. Integral mains distribution units are available as an option. VESA mounts of our own design allow easy front access when mounting small screens to Media Wall.

An example of a recent Module-R installation was the UEFA Match Control Room in Switzerland, designed by Gearhouse Broadcast. This includes three tiered desks facing a front monitor wall. All three desks together with the monitor wall surround are finished in white laminate Every desk is equipped to seat six operators and is a variant of the Module-R range. This specific design has a shallower frame than standard, being optimised for the latest ultra-compact control and communications equipment. Each operator position has two 22 inch widescreen monitors attached to the desk via vertical supports. Monitor cabling runs inside these supports. Also accessible to each operator is a three rack-unit equipment bay with a sloping control surface. These bays provide desktop access to talkback communications equipment. Every operator position also includes power outlets plus space for a laptop computer which can be docked into the MCR network.

Demand for tailor-made furniture has certainly not disappeared. An elegant solution provided for Arqiva was a 10 metre wide desk forming nearly two thirds of a circular configuration. This forms the centrepiece of an ultra-modern technical facility at the company’s European Playout Centre in Buckinghamshire. The desk and surrounding monitor supports were designed in partnership with Hampshire-based systems integration specialist Broadcast Networks.

Desk sharing is fairly common in many facility houses, particularly those in city centres where space is at a premium. SystemTwo is a multi-element desk designed to accommodate free-standing or pod-mounted equipment such as graphics workstations and editing terminals. The SystemTwo range includes the S2-01B desk and S2-02B shelf, both electrically adjustable in height from 660 to 1,250 millimetres. This gives users the ability to set a worktop to match their personal taste.

All Custom Consoles furniture is designed, built and tested to meet all current European legislation for ergonomic and structural integrity, while still ensuring that the look and feel add to the working environment and please the eye.

Following a successful IBC in September, our focus is now on the March 2015 CABSAT show in Dubai. The Middle East has proved a highly successful market and one which continues to develop. 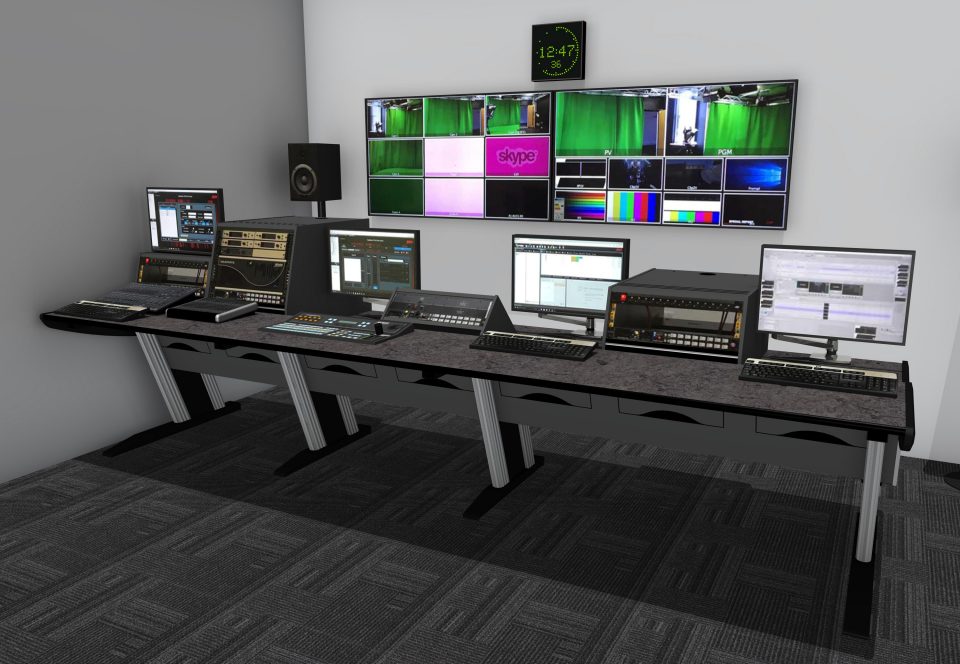